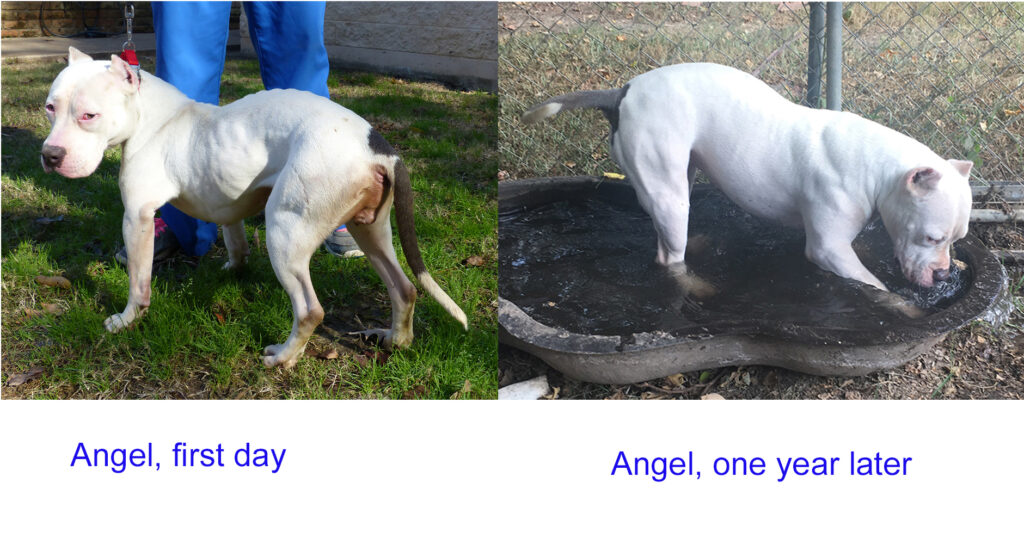 “My new name is Angel.  I think I had another one before.  Some people bought me and took me home because they said I would have pretty puppies.

When I was still a baby they cut off my ears.  It really hurt and I bled and bled, but they said it was to make me look right.  A rescue lady found me running down the middle of the street with my messed-up ears, and looked for my people.  She told them she could help, but they said it was okay, they were going to take care of me because they wanted me to have puppies.

So they fed me, and I grew, but then I got sick.  I felt bad all the time and it hurt to go to the bathroom and I was hungry, but they said if they fed me more I’d just make more of a mess.  Then one day the first lady and another one went to my people and said they would help me get an operation to get well, but my people said no, they had to breed me to get money for the puppies first.

Then another lady with shiny things on her clothes came and took me away to a place they called a shelter, and then to another place they said was a clinic.  They gave me medicine so I wouldn’t hurt, and then I had an operation for what they called a prolapse, and I started to feel better.

I got lots of good food, too.  Once I was better the first rescue lady came and took me to live with a foster mom.  It was the best time in my life.  She gave me toys and a bed and threw a ball for me and told me I was a good girl and that I would have a forever home someday.

But then I hurt my knee, and I couldn’t run anymore. So I went to another clinic and had another operation.  Now I can run again, and, even though I love my foster mom, more than anything else I want to get well so that I can have a real family. “